TV personality, Shaheer Sheikh is currently enjoying his private honeymoon with his wifey, Ruchikaa Kapoor despite the fact that the pandemic rarely allows for celebration mostly beyond a certain number of persons gathering together for events.

YOU MAY ALSO LIKE: Late Wajid Khan’s Wife, Kamalrukh Accuses His Family Of Harassing Her To Convert To Islam

This comes after the wedding news of Ruchikaa and Shaheer made headlines that the newly married couple had announced it on their Instagram accounts on November 27. Ruchikaa taking it to Instagram, shared an adoring photo of her with her husband.

The photo showed to fans the couple who were laughing like loving each other was the best thing that ever happened to them. Ruchikaa wore a blue suit, while the groom rocked a white kurta-pyjama and had perfectly complimented his bride.

Ruchikaa captioned the picture, “Off on an adventure called Forever.”

Currently, the couple enjoys a quality time together as they exploit the snow-filled hills and, guess what… it’s looking super romantic.

On December 25, Shaheer Sheikh brought the adventure to his Instagram account, sharing a Reel video of his wife, Ruchikaa Kapoor enjoying the snow. The video showed Ruchikaa happily kicking snow.

The proud groom spiced the video with a Christmas song. Ruchikaa rocked a pink suit with a nehru jacket, a bomber jacket and stole, indicating that the place must be freezing cold, but it’s worth it, I guess!

Meanwhile, Ruchikaa had earlier shared a picture with Shaheer on her Instagram account showing Shaheer driving on the snow-filled road, with his bride sitting just next to him, she captioned it, “Who cares where we’re going… when we’re going there together…”

YOU MAY ALSO LIKE: Shweta Singh Kirti Terribly Missing Sushant Singh Rajput In An Emotional Note

Shaheer also shared a video that showed him cruising in a ride on the snowy road with his wife by the passenger side, and it appears a close pal was behind recording the outing as the shot was taken from the back. 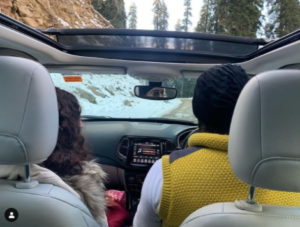 Shoaib Ibrahim Responds To Question Whether He Likes Food Cooked By...

Prince Harry Will Fly Back To US Quickly After Philip’s Funeral...

ABOUT US
SurgeZirc India is the Indian edition of the SurgeZirc global multimedia blogging platform which publishes news, politics, entertainment, lifestyle, sports and technology.
FOLLOW US
© 2021 SurgeZirc India a member of SurgeZirc Media / by Lens Tech Inc.
wpDiscuz
0
0
Would love your thoughts, please comment.x
()
x
| Reply